There is not too much to really criticise with the MuSo 2nd gen streaming speaker. As an all in one unit it does not do much wrong, the price while high for this type of product, is not extortionate but may put some people off as it is a lot more than the old model

Naim Audio has made quite a name for itself ( excuse the pun) when it first brought out the MuSo, suddenly one of the UK’s best known high end electronics manufacturers were selling an all in one streaming system at under £1000.  It was an instant success if sales are anything to go by and it was widely available in both HI Fi specialist shops and stores like Richer Sounds and Currys/PC World. Now you can look at this in two ways, either you can say Naim are selling out and devaluing the brand or you can applaud Naim for trying to put a proper Hi Fi product in front of a new audience who would not go into a specialist Hi Fi Shop. I tend to favour the second option as I have many friends who would be either to too intimidated to go into a specialist audio shop yet many of these people listen to music so why not try to attract them into a proper Hi Fi system.

Anyway the 2nd Generation of the MuSo streaming system is essentially a bigger and better version of the first models. i don’t mean by that it is physically bigger but it is more powerful, sounds significantly better ( at least to my ears) and has better connectivity. Now this does come at a price as the new units are considerably more expensive at £1299 however I do feel that this price increase is justified.

The 2nd Gen MuSo for a start looks better than its predecessor with the new metal finish. the oversized volume knob and the remote control. It also has better facilities the new volume knob boasts 15 touch sensitive buttons including a proximity sensor that wakes up the unit when you come close. It does also have an excellent new remote control but honestly you are probably just going to use your phone or tablet to control it. Naim have one of the better apps available for streaming.

Finally if you are thinking about multi-room or sound in multiple rooms again the Naim ups the anti from systems like Sonos which can only really steam lower quality which the Naim can stream High Res music and sonically is in a different league. 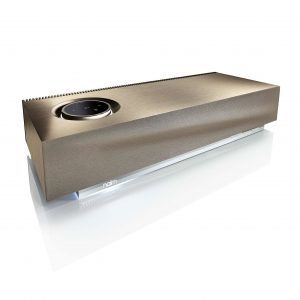 The origin MuSo was a very competent streaming speaker and was probably the best in its class under £1000. The new unit is however a very different animal. While its new price may put some people off it is a much more serious audio system. Its room compensation system means you can place it almost anywhere and get the best sound possible. The new MuSo is like a turbocharged version of the old one, it just does everything better, better dynamics, sound staging detail retrieval etc. The addition of an HDMI cable also means that it can double as a Soundbar for your TV. I used Tidal and Spotify to stream music to the Naim and it can easily differentiate  between the two. Spotify will still sounding OK is vastly outperformed by Tidal and streaming high resolution files from a NAS drive really proved the Naim MuSo is a serious audio component.  So there is plenty of connectivity apart from streaming with optical input, 3.5mm analogue input, HDMI and even usb. You can achieve multi-room with Naim’s own app, Apple Airplay2 or Google Chromecast. As I mentioned Tidal is built in and you can also do Spotify via Spotify connect and you can also use bluetooth. There is even an internet radio app with thousands of stations available. Finally the new MuSo is Room ready ( meaning you can use it with Room software). The new MuSo should be fairly future proof with the new multi-core chip being able to run pretty much everything currently available.

There is not too much to really criticise with the MuSo 2nd gen streaming speaker. As an all in one unit it does not do much wrong, the price while high for this type of product, is not extortionate but may put some people off as it is a lot more than the old model. It has more features some of them like the HMDI cable are very useful and it looks better than the previous model. Yes you can buy a separates system which would sound better and be more upgradable however the type of costomer who is buying the MuSo is looking for a simple all in one solution which gives them options like multi-room and connectivity to their TV etc so its not really a valid point.  Will serious Hi Fi customers buy one, probably not unless it’s for their kitchen or bedroom. However it will appeal to many people who would have no interest in a separate Hi Fi system and surely thats a plus for our beleaguered industry which often is its own worst enemy. After all how many of your friends think you are some sort of nutcase because you spend so much on your hi fi system or get excited by a cable or isolation device.