In these days of bluetooth and internet streaming surely there is no demand for CD players, so why review this Exposure XM, in fact why are manufacturers still making CD players? The answer is very simple most people over 30 have a significant CD collection. Also CD’s are so much cheaper that vinyl with older CD discs being available from a few pounds the doomsayers predicting the end of CD are a bit premature. Exposure are one UK company who clearly agree and in fact their little XM player is much more than just another CD player, it has an optical out and more importantly a proper 75ohm BNC output so can also be used as a transport.

The XM CD player comes in a half side chassis making it very compact and Exposure also make matching amplification so your system can be quite discrete, something that suits many people who simply don’t have the room or who don’t want too many boxes. Its a top loader which I personally like as many of the best CD players I have ever listened to are top loaders. At £1200 it is not an entry level player however it is also not overly expensive and it is very well built and finished for the price. I mentioned earlier that the XM can be used as a transport and actually its very good in that respect so by adding a very good DAC you can certainly elevate its performance  and I like that upgradelity. The internal DAC chip set is a PMC1716 24 bit unit which is certainly decent, while not setting the world on fire, however the DAC chip is only a small part of what it takes to make a decent CD player. Things like the power supply and analogue output stage and arguably more important and Exposure has done a good job on these as well. 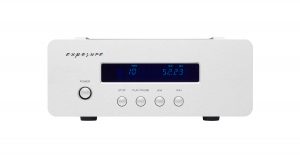 This is an interesting product because although is sounds very good and I have no issue with its sound quality or value for money it is really worth investing a bit of time and care tweaking this product as it then becomes really excellent. What am I talking about, well several things, first is isolation. I normally use some form of isolation underneath components and while it generally makes a little difference it is fairly minimal. Not so with this CD player, isolate it and its performance imported dramatically. Detail retrieval is better, dynamics are better, separation and imaging are improved. It jumps from being a very good CD player for the money to being excellent. I also mentioned earlier in the reviews that you can also use this player as a transport and when you add a very good outboard DAC through the BNC connection especially if the DAC also has a BNC input then you really hear what a good transport this is. In fact I would happily recommend this machine just as a transport as that’s how good it is.

So overall its a thumbs up for this versatile little CD player/transport. It is well built, sounds excellent and is a UK brand.  It performed flawlessly and was not fussy even with well used discs. I like its compact size and it’s available in black and silver so should match in with most other equipment.  Yes it has its faults, not everyone will like the fact that its a top loader so it takes a little longer to put a CD disc in and take one out. Not everyone will like how it looks, it is a bit minimalistic in that you only had a stop, play and track back and forward on the front panel but everything else is on the remote control. It also does not have a digital in which would be useful.

All in all perhaps CD still has its place in the audio enthusiasts source options. It seems the death of CD is a bit premature while companies like Exposure are continuing to make CD players as good as the XM.