Valve Amplification designed in the United Kingdom, sounds good to me… and I am happy to tell you it certainly is!

Puresound is a UK designed range of valve amplifiers which includes preamps, power amplifiers, integrated amplifiers and a valve phono stage. The man behind the brand is Guy Sergeant who has a long history in the UK audio scene having worked for among others Audio Innovations and is a very well regarded designer.

The model I am reviewing here is a latest version of the A30 integrated which now comes with a remote control, two mains transformers and upgraded output transformers. The A30 has been around for quite a few years and is a push pull design that can run in both pentode and triode modes. That simply means that although the amplifiers are using four pentode 6550 valves, they can be switched to run in triode coupled mode which gives a sweeter and more musical sound albeit with a slight loss of power. A push pull amplifier uses two valves in each channel unlike a single ended amplifier which uses only one valve per channel. The advantage of push pull is that you can get more power over single ended designs especially ones using Triode valves.

Although the amplifiers are manufactured in the Far East they are designed and tested in the UK by Guy Sergeant who told me that it enabled him to keep the prices more competitive and at a retail price of £2,000 for this amplifier you cant argue with his logic. I suspect you would double its price if you attempted to built this amplifier in the UK. 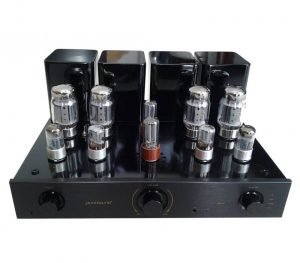 The Puresound A30R is nicely finished in a gloss black metal chassis with an on off switch, a volume control and a selector switch on the front panel. There are three line stage inputs and on the speaker outputs on the back you can select 8ohm or 4ohm depending on what output suits your speakers. I preferred the 8ohm tap with the Heco Direct speakers that I was using with the amplifier ( more about them in a later review)  but they are very high sensitivity speakers which are easy to drive and in my opinion are a great match with this amplifier.  Valve amplifiers are a lot more fussy with your choice of speakers because of how their output transformers work so it is important to take advice from a dealer when buying a valve amplifier to ensure it work with your speakers as it is not just the sensitivity but the impedance dip on the speakers that needs to be addressed.  The A30R has 30 watts per channel available in pentode mode and about 18 watts per channel in triode coupled mode. This might not sound a lot but most valve amplifiers are Class A designs which means they are a lot more powerful that their transistor counterparts ( most of these amplifiers run in Class A/B or Class D).

Once the amplifier had warmed up it was obvious that this was a seriously good amplifier. Especially in the triode mode the sound was sweet, musical but with great dynamics and lightning fast transients. The soundstage was huge and very three dimensional with pin point imaging and instruments and voices were produced with exceptional realism. While £2,000 is obviously not an inexpensive amplifier the A30R is simply exceptional for this price. It was playing every type of music I threw at it including rock with aplomb but on the live and acoustic tracks it was simply sublime. OK it does not perhaps have the same control of the bass as large transistor amplifiers and as I mentioned before the choice of speakers is fairly crucial and its not the most powerful amplifier at this price point. That said if you are looking for an amplifier which plays music there are few I have heard which do a better job even at many times its price.

My overall impression of the A30 R integrated amplifier was very positive. Its not all things to all people (what is?) and you need to take care partnering it but if you get the right speakers this little integrated can produce amazing results and unless you are very anti-valve, need more features or power it has very few peers and is one of, if not the best integrated amplifier I have heard at this price point.  Very highly recommended.