The Spendor A4 came with an exceptional reputation, so expectations where high… unfortuantly while they aren’t by any means bad, they didn’t live up to what I hoped for

The Spendor A4 is the third model up in the A series range but is still quite a compact floor stander. I was looking forward to reviewing these speakers as they are a long established British brand and I have been reading good things about them over the years. In fact the brand has long been associated with the BBC monitor speakers and still makes a Classic range of speakers which are based on the 70s originals.

The A4 is a two way floor standing model which a 180mm bass/midrange unit and a 22mm soft dome tweeter. The crossover uses 2nd and 3rd order filters and is not overly complex which can be helpful in not affecting the sound quality particularly the imaging. For such a small model the specifications which Spendor state on the brochure are remarkable. 35Hz in the base to 25KHz in the high frequency from a speaker which is only 861mm tall x 165mm wide x 284 deep is impressive. They are however at 86db not particularly sensitive although the impedance is 8ohm which helps. At £2,300 a pair the Spendor is in a very competitive sector of the market with a huge amount of floor standing speakers in the £1500 -£2500 price bracket. The Spendor is quite a plain looking speaker in a standard box shaped design although the finishes are all real wood veneer.

There is no doubting that this is quite a neutral speaker, it certainly does not have any glaring faults or nasty traits and it is not as bright as many modern speakers. Everyone nowadays seem to have a passion for metal dome tweeters which, while they can throw out lots of detail, in the most part just give me a blinding headache over longer listening times.

There is also decent bass from such a small box and the midrange and high frequency while not the most exciting seem to do a good job.

Spendor A4’s also have good imaging helped by the compact design. I played a wide variety of music which included acoustic, jazz, blues as well as rock and classical to see if the speaker could cope with all types of music. It has been said in the past that the Spendor speakers suit classical music and there is an element of truth to that. I preferred them with classical pieces and to an extent with jazz. Less so with the rock and blues music but few speakers can play everything well.

These speakers were for me a bit like going to a film which has been massively hyped and while you enjoyed the film it did not quite live up to the hype. I had read so much about the speakers including other reviews which waxed lyrical about how good they are and while I enjoyed listening to them I somehow expected more from them.

My difficulty is that there are other speakers in this price range that I much prefer sonically and also speakers in the same price point which have better aesthetics and are better finished.

I feel somewhat perplexed by this as I really wanted to like these speakers but try as I might and even changing the amplification from my normal valve amp to solid state didn’t really make any difference. I thought the valve amp might be struggling to drive them as they are a little inefficient but the impedance dosen’t drop much below six ohms so I couldn’t see the speaker being a problem with a valve amp. Having tried a solid state amp it quickly became clear that the valve amp was not the issue. However given the low sensitivity it makes sense to ensure your amplifier can drive them properly.

Now Hi Fi is a very personal thing and speakers are probably the most difficult product to review as rooms can sometimes interact and affect the performance but I genuinely don’t think that was the issue.  I tried them in various positions in the room and found the sweet spot for them and they worked well in that placement.

As with all equipment a review is only one persons opinion and as they say opinions vary so as with any purchase go and listen to the product for yourself and make up your own mind. Also I do not mean that these are in any way a bad loudspeaker, nothing could be further from the truth, but for me personally they did not live up to what I was expecting. 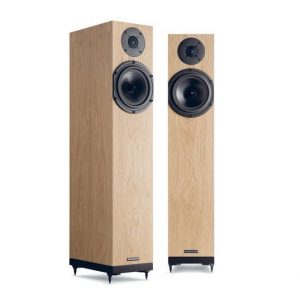 I have already touched on this area earlier in the review. The model comes in a number of real wood veneer finishes including black ash, natural ash and walnut. It is well built and solid on the whole. It’s not the sexiest speaker in the world and is rather plain looking but then that may appeal to many people. Also the small footprint and overall size of the speaker will make it very wife friendly.

To be honest there were no glaring faults with these speakers. I can nit pick on a few things but really the speakers don’t do that much wrong. The sound quality is quite neutral, the build is decent and the finish is also good.

The Spendor A4 is a well rounded speaker that is a petite size and produces good bass. I feel it is probably better suited to classical music. At their price point they do a decent job and they are certainly less harsh than many other speakers.